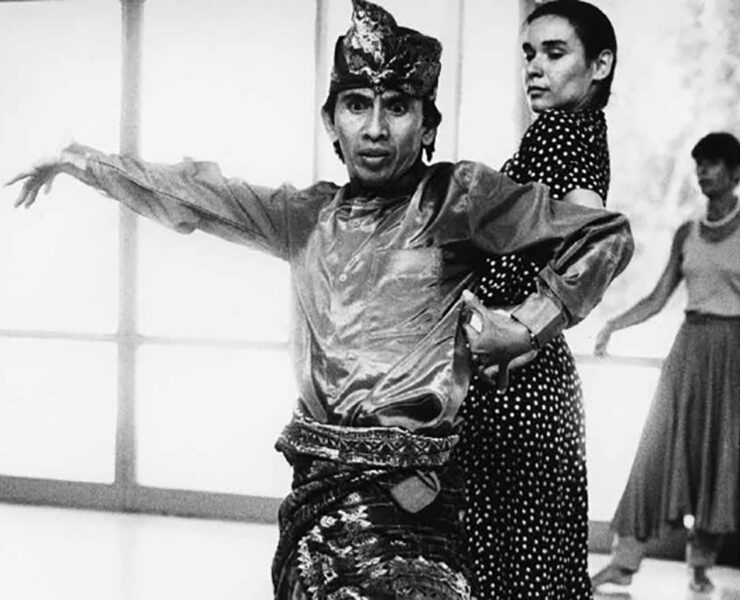 Introductory text by Eugenio Barba: The actor’s tradition and the spectator’s identity
ISTA has reached its fifth public session. The relationship between on-going research and the outstanding moments of the public sessions of recent years has evolved towards an ever increasing concentration. At the beginning it was a question of courses of several weeks’ duration in which actors and directors came face to face with the technical foundations of various theatrical traditions, carried out dramaturgical projects and trained. There was, however, another tendency: that of a wide-ranging exploration of performing techniques, brought about by the various Asian and western masters who form the permanent staff of ISTA. Many questions came out of these sessions and with them some tentative answers. We questioned ourselves as to the existence of certain constant principles; as to the analogies between physical and mental processes; as to the possibility of identifying a lowest common denominator between the various processes of the actor or the director, the playwright or the spectator. This tendency has prevailed. Today, ISTA’s public sessions are the opportunity to make the jump from theory to practice, from abstract ideas to tangible action, from the simplicity of rational hypotheses to the complexity of experience. All of this is achieved through the participation of actors, directors, scholars, specialists in various disciplines and, above all, as a result of the contribution of Sanjukta Panigrahi and Katsuko Azuma, both of whom are delving deep into their own tradition in search of a transcultural dimension of their knowledge. Although ISTA represents the convergence of results from years of research, its public sessions are not simply a display of conclusions. Although interwoven with spectacular elements, they are not performances. At times they appear to present the lack of order characteristic of vagabondage; this is necessary in order to perceive in a new light something which we believed we were already familiar with. We have moved from the subject of the performer’s pre-expressivity to that of the bipolarity of his/her energy (Animus/Anima); from the state of physical pre-expressivity we have passed to questioning the mental one. Moving from the analysis of the way the actor models the spectator’s attention, we have reached the subject of the “peripetias of the meaning” which characterises the creative process and the confrontation between the actor’s own historical or personal traditions and the identity of the spectator. It is this that will be the theme of the Salento ISTA. This is the second time that ISTA’s public sessions will have taken place in Italy. From August to October 1981 in Volterra the work was almost monastic in quality, shut off from the outside world. In September 1987 ISTA’s activity will take place out in the open, in the streets and squares of Salento. Neither the differences, the difficulty in understanding, nor the shock of unfamiliar sights bring about a loss of cultural vitality. They are not an obstacle but a stimulus. They do not dampen the flame of interest but fan it. It is uniformity which dulls the mind. It is seeing the same old things and experiencing the same old celebrative emotions that fail to arouse new questions. Salento ISTA will have to create the arena in which the energy born of the diversity between the cultural identity of the spectators and the performing traditions of the actors can be felt. The result of diverse traditions will be situated in different contexts among spectators of quite different cultural backgrounds but capable of exchange. It will not be prior knowledge that will encourage this encounter, but the sense of diversity. The elements that allow a cohesion between actors and spectators able to overcome the differences in their cultural backgrounds, are to be found in the level of pre-expressivity of the theatrical composition. There are moments in which the spectators cannot grasp what is going on, cannot follow the details of the plot that is being played out or danced before them. They recognise, on the other hand, signs of hard work and dedication, and the existence of a tradition. Even if actors and spectators do not have points of reference in common, they are drawn together by a common rhythm, by a physical and mental ‘dance of energies’. This complex process will be examined in a number of contexts, both with spectators who are used to so-called ‘artistic’ performances and with spectators among whom the models of popular culture are still alive. A number of experiences, both spontaneous and deliberately planned as moments of ‘barter’ show quite clearly that situations of this type are not only possible but have frequently occurred in both the recent and past history of theatre; a history based on travelling companies performing in lands where the actors’ culture and traditions are not necessarily those of their audience. Salento ISTA intends to observe closely what happens in such cases. It will mean observing how the sense of the performance is transformed while passing from the actor’s tradition to the personal translation of the spectator rooted in a different tradition. We shall set out, in a sort of open-air itinerant laboratory and under experimental conditions, to identify in its dilated and extreme form that very inconsistency between the actor’s and the spectator’s vision which is common to a greater or a lesser degree to all theatrical relations.

In connection with Salento ISTA, the Italian anthropologist Piergiorgio Giacchè from Perugia University did six months’ field work in this agricultural region of southern Italy. During this research into the “identity of the spectator”, he collected a comprehensive documentation of biographical facts from a group of selected people with different cultural and social backgrounds. These facts included descriptions of performative situations from daily life such as religious processions, popular celebrations, fairs, brass bands, funerals, family ceremonies etc, which had left an imprint on each individual. This enabled Giacchè to trace the criteria or ‘filters’ through which these people reacted to dance and theatre performances. He has presented the ongoing results of his research in several publications and lectures at national and international conferences.

Excerpt from “Report on the 5th Public Session of ISTA” by Peter Elsass, Copenhagen University; Jean-Marie Pradier, University of Paris 8; Nicola Savarese, University of Lecce: Text and Action – During the first week all participants met each morning at 6 o’clock in an outdoor space called Epidaurus. Everyone was involved in developing a ‘workshop performance’ or short ‘frontier production’, based on Goethe’s Faust. Two actors/ dancers, the Japanese Katsuko Azuma (Buyo dance) and the Indian Sanjukta Panigrahi (Odissi dance), a Japanese Kabuki actor, Kanichi Hanayagi (onnagata), three Odin Teatret actors, an orchestra composed of Indian musicians led by Raghunath Panigrahi (flute, sitar, percussion, harmonium), a Japanese singer and a shamisen player, and Odin Teatret’s musicians (guitar, flute, violin, choir), worked under the direction of Eugenio Barba. The Faust theme was retained due to its importance and because of the quality of the dramatic works it has generated. Each participant was asked to prepare for the session by at least reading Marlowe’s and Goethe’s Faust prior to their arrival in Salento. This previous preparation continued at ISTA through sessions of collective analysis and workshops. The work on Faust evoked echoes that reverberate throughout our dramatic literature: the visible, the invisible, the metamorphosis of the character – Mephisto; the pact with the Evil, its stakes and consequences; the quest for knowledge and power; the love relationship, and manipulation (Margareta’s character); identity. Barba’s approach consisted of developing a performance text which used the contributions of the participants as a point of departure. The participants were divided into groups, each of which was asked to propose a sequence of scenes that they considered essential to the plot, and for which they were to provide possible corresponding physical actions. Barba then worked on the transformation of this ‘global text’ – anecdotal, dramaturgical propositions – into precise theatrical scenes, elaborating the already established scores of the Asian and European performers. The entire workshop process culminated in a final run of some 30 minutes duration which ended with the collective reading of Goethe’s “Dedication” from the first volume of his Faust.