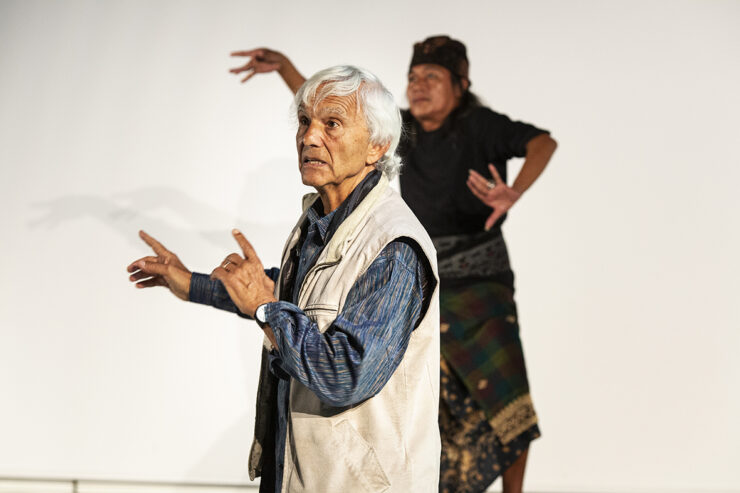 Text written by Gregorio Amicuzi, tranlasted from Spanish to English by Pedro Rothstein.

We are in Favignana, a small island of the Aegadian Islands in Sicily, southern Italy.

70 people from over 15 countries, willingly confined.

An itinerant intercultural village, imagined by Eugenio Barba in 1979, now in its 16th edition, becomes reality thanks to the incredible effort and work by the organizers who take the challenge of accomplishing the impossible.

And thus, he presents ISTA, as an act towards theatre and research, something that seemed impossible to achieve and even more in pandemic times.

It’s not a festival, nor a congress.

The ISTA, International School of Theatre Anthropology, is a gathering where participants, live, sleep and eat together with the masters. For 10 days, the questions around the “principles that return” as Barba calls them in his book ‘The Paper Canoe’, find their answers in the different traditions that are presented.

An intense programme begins every morning at 7 am, by the sea, where each day one of the masters sings to welcome the sun. After that, the practical workshops commence followed by meetings with maestro Eugenio Barba. In the afternoon, work demonstrations and in the evening performances are open to the external public.

Barba creates and invents the concept of Theatre Anthropology together with Nicola Savarese in “The Secret Art of the Performer” and defines it as the territory of the study of the pre-expressive behaviour of human beings in a situation of organized performance. It searches, it studies, it analyzes what is behind the stage action, the actor’s bios and the common principles in different theatrical and popular traditions, where there is an organized representation of reality.

What is the daily work of Parvathy Baul, guru-singer of the Bengali Baul tradition? What are the exercises that accompany the early mornings of Keiin Yoshimura, Noh theatre and Kamigata Mai master from Japan?

What is the training of Julia Varley from Odin Teatret that allows her body-voice to be alive and active after over 40 years of work? What does the daily physical training of Ana Woolf entail, an Argentinian performer who combines different techniques including Tadashi Suzuki’s?

What have in common the Gambuh dance performed by I Wayan Bawa from Bali with the Flamenco dance taught by Caterina Scotti, the Bharatanatyam taught by Tiziana Barbiero or the Kathakali dance taught by Alessandro Rigoletto – all three members of Teatro Tascabile di Bergamo?

At what category level can the popular traditional Cavalo Marinho from the state of Pernambuco in Brazil and presented by Juliana Pardo and Alicio Amaral with the Kutiyattam of Kapila Venu? Or how do these traditions dialogue with Lydia Koniordou, a greek actress and expert in Ancient Greek Drama?

These and other questions accompany ISTA.

A great kaleidoscope of techniques where maestro Eugenio Barba approaches with a microscope in search of details that observe the physical tensions of each action. From these empirical observations, the principles of theatre anthropology are distilled, contaminating the bodies of the participants who ask how and if they will be capable of incorporating them into their daily practice.

According to his definition, they are reduced to three “the principles that return”, present in different performative traditions: the balance in action or principle of balance alteration, the dance of oppositions and the omission or principle of simplification.

The questions and tasks proposed by Barba to the other masters spin around learning, on how their technique is studied and transmitted to others. They also highlight the tensions in the actor/dancer’s body and in their capacity to direct the energy and influence the kinesthetic perception of the spectator.

Eugenio Barba reflects on, wonders about, composes with and, ultimately, contrasts the different disciplines with a particular look that becomes a ‘school’, allowing the 50 participants to open up, ask themselves and build their visions of what theatre is and most importantly, why do make it.

When asked about what is ISTA and why is it needed, the maestro replies:

“The ISTA has become for me a situation of kinesthetic didactics: learning to learn by doing. I can gather the masters whom I’ve known for such a long time, from different traditions and performance genres and with them transmit our knowledge on the technical principles of the actor/dancer’s presence. ISTA is part of a wider project of knowledge sharing that the Barba Varley Foundation is carrying forward, alongside the open access ‘Journal of Theatre Anthropology’ and the making of ten films on theatre anthropology.

During the ISTA sessions, participants have the opportunity to meet masters from Asia, Latin America and other cultural areas who show practically the technical principles that allow for the development of the actor/dancer’s individual presence on stage.

The field of theatre anthropology is the study of the human being in a situation of organized performance or representation when the actor/dancer utilizes their presence under different principles than those of daily life.

ISTA can influence and open new horizons to a bunch of participants. They’re not many, between fifty and eighty normally. But the participation becomes the physical and material experience, that the Earth is round.

And what are the consequences for an actor or a director to discover that the Earth is round? What are the effects on their social and artistic environment?

I will tell you how some Latin Americans who studied and participated in ISTA reacted. For them, the encounter with Asian actors was at first, a surprise. What use could these ‘exotic’ theatre forms have, as they seemed so distant from the theatrical techniques in Latin America, the US and Europe? Yet, they discovered and began to understand that behind these distant forms there were technical principles that they could use.

What did the cleverest of them do? They looked at their own culture, to the extraordinary spectacular richness of popular manifestations in the Andes or in Brazil with the Orishas’ dances of Candomblé, the Cavalo Marinho, the Bumba Meu Boi and so many others. A whole profusion of dancing actors at the popular level, whose techniques and expressive force was not all taken into consideration by the theatre-makers. In Latin America, since the 1980s, those who had practically lived the ISTA experience started to apply the principles of theatre anthropology concerning the heritage of their own cultures.

IN the next issue of JTA, Journal of Theatre Anthropology, there will be published some articles by Latin-American actors and directors who describe how theatre anthropology has been a tool for them to approach and understand their Indigenous and/or autochthonous cultures. Without copying the external formats, they have nourished and inspired their artistic creations thanks to the knowledge of theatre anthropology.

In a performance situation, there is a change from a daily to an extra daily behaviour. It is what constitutes the actor/dancer technique. This technique is rooted in the use of a set of principles to intensify their presence. Presence is a fundamental factor to attract and stimulate the spectator’s attention and at the same time keep in it for one, two, three hours… So, to stimulate the brain, to feed the spectator’s attention and perception, the actor must produce a whole series of new stimuli, not only in the verbal/conceptual level of the text but also in the physical empathy level with the spectator, by doing dynamic and sound actions. That is what the actor/dancer’s job entails. This knowledge incorporated into the technical principles allows them to create a dynamic of somatic and acoustic variations that are true associative and sensorial stimuli affecting the spectator’s nervous system and kinesthetic sense.

Among the individual technical principles of theatre anthropology that are the basis of the extra daily behaviour of the actor/dancer, we can find: the alteration of balance and daily posture, which provokes a tonic mutation in the actor’s presence, a network of organic tensions in the body that impact the spectator’s vision and neuronal activity, that is, their perception. The actor/dancer’s extra daily behaviour generates an unusual body, a strangeness process, by making surprising a well-known behaviour such as walking, grabbing a pen and writing, smoking. For the actor, the way of intensifying how they perform their actions becomes essential. Here is the immense richness of technical wisdom in the different coded traditions. These traditions are a concrete example of how to intensify their presence and they become an inspiration to detect these principles that can help the actor working in contemporary theatre in building their way of being present today, in their place and time.”

The different traditions are presented in two working sessions every morning split into separate working spaces, each named as a city that previously hosted an ISTA session (Bonn, Volterra, Blois, Brecon, Londrina, etc.).

After the morning training, follow the work demonstrations and reflective moments with the masters. Barba’s masterclasses who is the director of this “School of Looking” (Scuola dello sguardo – as defined in Italian by Nicola Savarese), places the focus on those details that connect this archipelago of techniques presented to participants. The common principles are made evident, ‘the principles that dance’ in the different personal and collective traditions of the invited masters.

In the afternoon, after lunch, there is also a moment for ‘barters’, the exchange between participants. In this exchange of ideas and practices, relationships, friendships and collaborations are born.

A necessary village made possible thanks to the incredible efforts of maestro Barba, 85 years old, his collaborators and especially the strength and determination of the organizers, Teatro Proskenion from Reggio Calabria and Linee Libere from Rome, who took the reigns of the project, despite COVID.

We sail on this island, Favignana, where a former tuna factory (almadraba/ tonnara) welcomes us and the sound of the sea involves our sleep at night while our masters’ chanting transforms the silence into action.

We take many questions with us, loads of exercises to investigate in our rehearsal rooms and foremost a great diversity, invisible strings that thanks to the techniques become tangible.

With all that, we imagine the next meeting, in a small town in Spain, able to receive this grand theatre village and to make possible, the impossible: a great and necessary encounter where the ‘principles that dance’ turn diversity into a shared experience.

This article is an English translation of: